These subreddits are not organized in any systematic way though, and Reddit users usually find out about new subreddits through word of mouth.

In order to develop the most comprehensive map of these subreddits to date, I analyzed over 1.2 billion comments made by users across 47,494 subreddits (from January 2015 to October 2016) to create a mathematical representation of each subreddit. The core principle is "guilt by association" - if the same user comments in two subreddits they are likely to be linked in interest. So, each subreddit can be represented by a mathematical vector that summarizes how often users commented in that subreddit and also each of the other subreddits.[1]

Below is an interactive clustering of subreddits based on user comment co-occurrence. Subreddits that are closer together on this plot are more likely to have users that comment in both. Note that you'll want at least 4GB of free memory on your machine to run it with all the subreddits:

I've also created a large zoomable image file of the clustering including all 47,494 subreddits that you can download [here](https://github.com/trevormartin/shorttails/blob/master/subredditalgebra/plots/tsneplotlarge.png). If you want to open the subreddit map in its own window click here.

Below is an interactive tool for calculating subreddit similarity, either to a single subreddit if you enter one or to any combination of up to three subreddits:

The closer the similarity score of a subreddit is to 1, the more similar it is to your query. If you want to open the subreddit similarity calculator in its own window click here.

The subreddit clustering map gives rise to some broad categories of subreddits that I've highlighted in the image below: 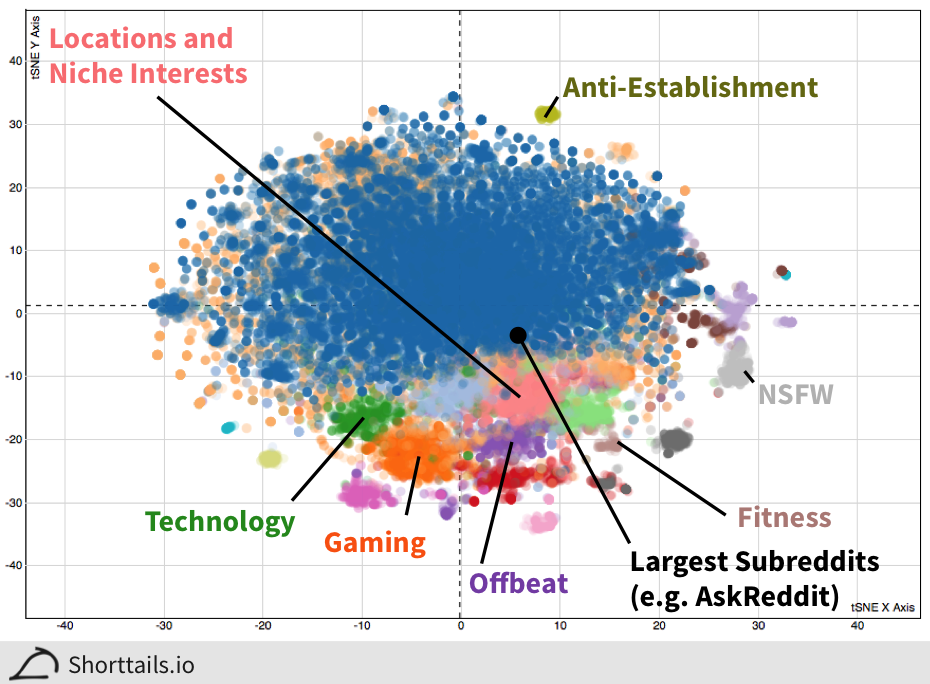 As you can see (and confirm in the interactive plot), subreddits cluster nicely into semantically related groups such as technology related subreddits (e.g. [/r/apple](http://www.reddit.com/r/apple" target="_blank) and [/r/Ubuntu](http://www.reddit.com/r/Ubuntu" target="_blank)). And when we zoom in we can see that there is also interesting and informative finer-scale resolution, such as when we look at a cluster of music subreddits in the following image: 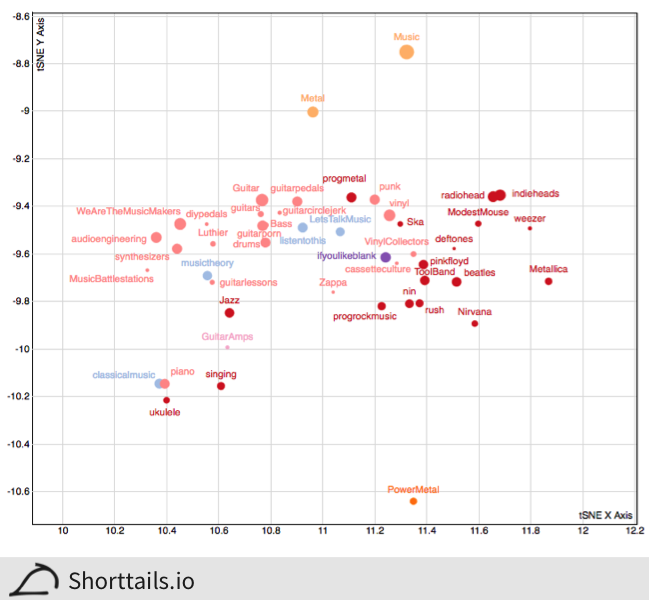 Aside from the ability noted above to locate a city's sports teams by combining the city's subreddit and the national sports league, there are many other interesting subreddit similarities we can calculate. As a simple example, the image below shows the analysis of subreddits similar to [/r/hiking](http://www.reddit.com/r/hiking" target="_blank): 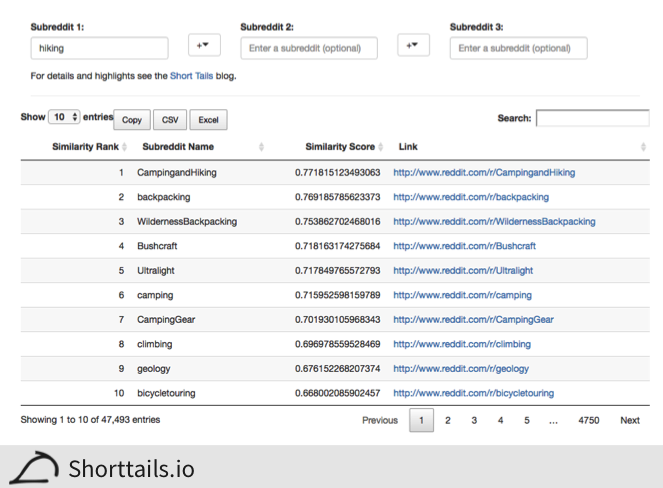 We can see that we indeed get back a list of subreddits that would definitely interest someone with a passion for hiking. Looking at subreddit combinations we see:

The combination of interest in books and scifi suggests a strong interest in written science fiction:

The sky is the limit on using this subreddit "algebra" technique to find interesting combinations - feel free to email me with interesting results you find and I will highlight them here!

Reddit comment data is from a great collection hosted on Google's BigQuery.[3] In particular, credit to Reddit users /u/stuck_in_the_matrix and /u/fhoffa for downloading and uploading the data.

A Timeline of Terrorism

The recent terrorist attacks in Paris have unfortunately once again brought terrorism to the front of many people's minds.…